Everything Is Now A System

Systems Theory suggests that a system represents an abstract organization of phenomena that is independent of their substance, type or their existence in space and time. If true, understanding how a system works should enable us to understand how other, similar systems work and, by superimposing one set of workings of a system on another, be able to better understand both and predict their effects even if we haven’t got direct access to one or if it is too complex to analyze quickly.

It is through this supposition that we simplify and compartmentalize aspects of the real world so we can study them better, understand them more clearly and try to improve them.

Science, of course, is full of such examples. It uses animal research to get drugs approved that will be used by humans (and evidence is accumulating that perhaps that approach is wrong) and it uses lab work to predict how specific traits such as obedience differ when encountered in the field as opposed to the lab. But while science has used, mostly, systems theory correctly, that’s not how we believed the world we used to live in worked.

To understand the change and its implications for marketing, branding and yes, search too, it is important to understand what was in effect before.

Everything else that went on to affect the organization, the thinking of the time went, happened only inside the organization. Concepts such as corporate ethics, social good, corporate morality and even corporate reputation were, it was thought, solely dependent upon internal actions that were put into effect as a result of smart executive thinking.

Such compartmentalization is clearly detrimental yet, in the past it worked and the outdated simple, hierarchical, organization chart below shows why. Companies caught up in efforts to deliver constant efficiencies of scale actually did so and their scaling delivered measurable increases in productivity and profits that made it seem like everything worked exactly as predicted. 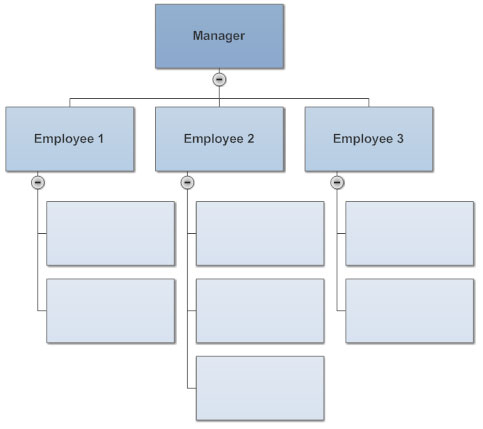 Marketing personas: the improbably generic approximations of the ideal target audience type were “good enough” to actually produce results when employed in communications, advertising and marketing. Everything in that world was top-down, one-to-many and controlled by gatekeepers.

News came at 9.00pm in a 30-minute televised slot. Newspapers put out morning and evening editions. Anything that happened in-between or was not sufficiently important to squeeze in disappeared like it’d never happened. Marketing was the last-mile link that connected the efforts of an organization with those who were (it was thought) willing and ready to consume its services or products.

It’s true that if the only tool you have is a hammer you end up hammering everything down and statistically quite a few things will behave almost as if you’ve used a screwdriver and that’s just the point. It doesn’t matter much, until it does and then you’re in trouble.

When every legacy model of the 20th century behaves like everything is an isolated, autonomous system the inconsistencies accrue until the model crashes. This is where we’re at right now.

How Do We Solve This?

The solution lies in examining the fundamental assumptions that led to the problem in the first instance. I know this sounds vague and broad so let’s narrow it down. Everything is about people. People are emotional. Emotions, however, are incredibly difficult to model so most models treat people like we are perfectly rational beings making decisions based upon the careful consideration of our own best interest.

This used to be called “Human economic behavior” and it is accepted that it is an unrealistic representation of how people actually behave which is why the new science of behavioral economics has risen to take its place.

Behavioral economics, in short, looks at every decision and every relationship in each economic, marketing, social, branding or even search related space as the result of three distinct layers:

These three then require us to look at every entity (and indeed every object) as a system that’s connected to other systems. A worker’s strike in a paper mill for instance cannot be understood just as a contained event that is reflective of a specific situation. We need to take into account market conditions that govern employment, the state of the economy that drives inflation, job prospects that open up other job opportunities and even the overall happiness indicator of the country as a whole that governs the emotional tone of professional relations. Search, marketing and branding cannot occur in a silo any more or function independently of each other.

When everything is so interconnected the question arises, just how much do we take into account? How wide should we cast our analytical net? At which point do we say we have sufficient information to make a decision?

The decision paralysis that frequently happens when we are faced with an overwhelming amount of information can be stopped if we apply three very specific filters to it:

Here’s the thing. None of this is easy. It requires the conscious development of critical thinking and the ability to train our minds to work differently. While there are ways to do exactly this they require time and effort which means you need to truly feel the need for it. That, in turn, means that you’re aware of the benefits if you go ahead and learn to behave differently.

From a practical point of view the world is so large and so complex that there are still many pockets of doing business or working and living where legacy models, the stuff that comes instinctive to us, are still OK. There are however also many areas where they are not.