Let’s run a thought experiment: Suppose I invite you to a business dinner to discuss something of great professional importance to both of us. I set up a beautifully arranged, delicious-looking meal and seat you opposite me on a plush chair with an amazing cushion. We are now set to have a great meal and memorable, mutually beneficial conversation for the next two hours.

There’s a catch: neither of us can move from our seats until the dinner is up. Should that happen it’ll be a potential professional deal breaker. It seems a ridiculously easy bar to beat of course, so we both agree. Except I’m not playing fair. Your cushion has a sharp-edged pebble hidden inside it.

It makes itself felt the moment you sit on it, but it’s no biggie. You adjust the way you sit a little and filter the minor annoyance it represents out. This is called “sensory gating” and its most easy-to-understand form is “the cocktail party effect” whereby the brain reduces the perceived input of surrounding party-goers noise in order for us to ‘hear’ our name shouted from across the room.

Sensory gating is a physiological process we employ in order to better filter information in complex situations. The dinner setting is important. You do what any higher-thinking form may do here and filter out the annoying pebble.

The thing is that just like any other physiological process, sensory gating[1] takes up energy. In order for your brain to successfully filter out the annoying sensory input of the pebble you’re sitting on it needs to activate a network of centers that include the prefrontal cortex and the hippocampus as well, usually, the auditory cortex and the olfactory cortex.

These are all critical in our context but the most important of the two are the prefrontal cortex because it plays a role on our ability to direct our attention and set and achieve goals and the hippocampus which also plays a role in goal-achievement as well as being key to memory and learning.

As our dinner progresses and I lay out my complex plan for our mutual examination and agreement out of necessity you have to direct a lot of your attention to me and, also, carefully process what I am saying. In addition (and because I planned all this carefully) I direct your attention to the various exotic dishes that have been served and ask for your impression forcing you to also engage your olfactory complex.

The Energy Requirements Keep Piling Up

You’re of course highly motivated. You want to get a positive outcome out of this dinner meeting, just as I am. You ignore the pebble that keeps digging into you. Comment intelligibly on the taste of the exotic dishes and the wine and make all the right noises as I present my proposal, while at the back of your mind you’re analyzing its effectiveness and attempt to guess at what I am driving at in case my intentions are not quite above board.

Pebble-created-irritation aside, all the rest is perfectly natural in a negotiation and/or meeting of sorts between two people. It all, however, takes energy. Dealing with the effects of just a single glass of wine requires the body to engage in quite an extensive filtering process. Digesting the food also requires energy.

At this point your brain is dealing with an affective element (our meeting, its importance and the stakes of breaking the rules we’ve both agreed to), a cognitive element (the practicalities of a business proposal that could change both our lives) and a sensory one (the tastes, the smells, the feelings and that darned pebble).

As it turns out the pebble tips the balance of power here.

Inside your head your brain is overloading. In order to more efficiently deal with all this input it begins to link the emotional (and maybe cognitive) discomfort you are experiencing dealing with all this with the physical pain produced by the pebble. This leads to pain sensitization that now affects the entire central nervous system.

In pure, simple, English, you re painfully aware of the pebble to the extent that it looms massively large in your attention horizon. Things we pay attention to are given a special place in our list of priorities. You really, really feel the pain. Logically, you know that it is a tiny pebble, that the dinner meeting has an expiry date of two hours and that you simply do not want to mess this up by moving from your seat. But …

Inside your brain the relatively mild sensory signals that first told you that there is a pebble inside the cushion have now taken a much greater urgency that can no longer be ignored by the body. Because the body can no longer ignore them, neither can the mind.[2] The filter you initially put in place to control them is failing.

When that happens your awareness of the level of discomfort you are in grows. Inside your brain this awareness causes the increase in electrically charged chemicals, called ions. This is complicated now but, in order to simplify it let’s say that there are positively and negatively charged ions that can cross the cell membrane. Cells use a process called “the sodium ion pump” to maintain themselves in a state of balance.

Under certain conditions such as specific physical and emotional stimuli cells, through the sodium channels, allow more positive than negative chemical ions to enter. This increases the positive charge that accumulates inside the cell until it reaches a critical threshold. The moment that critical threshold is reached the cell fires. This is called an action potential.

Now, it gets even more interesting. The moment the cell decides to fire there is no stopping it and there is no halfway house response. Cells either fire or don’t. Axons, the threadlike appendages of cells in the brain (i.e. neurons) are either activated or they are not. When they are activated and fire they are activated fully. This is called the all-or-none law.[3]

Without you barely being conscious of what you’re doing you stop eating and stand up. Our dinner meeting is suddenly over and whatever deal we were in the process of agreeing is off.

Motivation Is Mostly Hidden From Us

But the all-or-none law has proved, time and again, that the moment the neuron is ready to fire it will and you can no longer stop it than you can stop lightning from striking the ground during a storm (which incidentally is very similar to what goes inside our head when an axon fires[4]). That means that you once the critical threshold of positive ions was reached you had no choice. Even worse, because the entire action of your neurons firing and you standing up happened way before you became aware of the impossibility of sitting on that pebble in the cushion a second longer, you also had no agency.

I hope you see what I’ve done here. I specifically engineered the physical conditions in this imaginary business dinner of ours to make you do something that will go directly against your own best interests and you will have no means of preventing it.

Motivation is designed to, always, take us from a place of discomfort to a place of relatively less discomfort. This is exactly what happened here.

This raises some questions when it comes to self-development such as, “do I ever have any say in this?” And, in marketing: “Can I engineer my physical or digital environment so that my potential customers have no choice than to buy from me?”

The answer is “yes” and “yes”. Motivation, we’ve seen, in more complex than this. Knowing its components mean that it can be engineered to help us achieve what we really want to achieve. In this thought experiment I succeeded in making you do what I wanted to do because I controlled all the parameters and you were unaware of quite what you were letting yourself in for.

In my “From Axons to Actions” article I covered the point of how potential customers can be assisted in making the right choice and choosing your business.

Had you come into this dinner meeting with your motivation clearly framed you’d have different parameters to operate with and a different awareness of what was at stake. In that context you’d most likely be able to resist the temptation to stand up before the business dinner was over. If you’d come to the dinner meeting fully aware of the impending “pebble ordeal” you would have been mentally and psychologically prepared. Making it through the dinner meeting would then, have been a walk in the park.

What can we understand from this?

Context matters. Framing and articulation create awareness. Awareness creates context. Context, as I’ve mentioned before, changes the value of the data we possess. 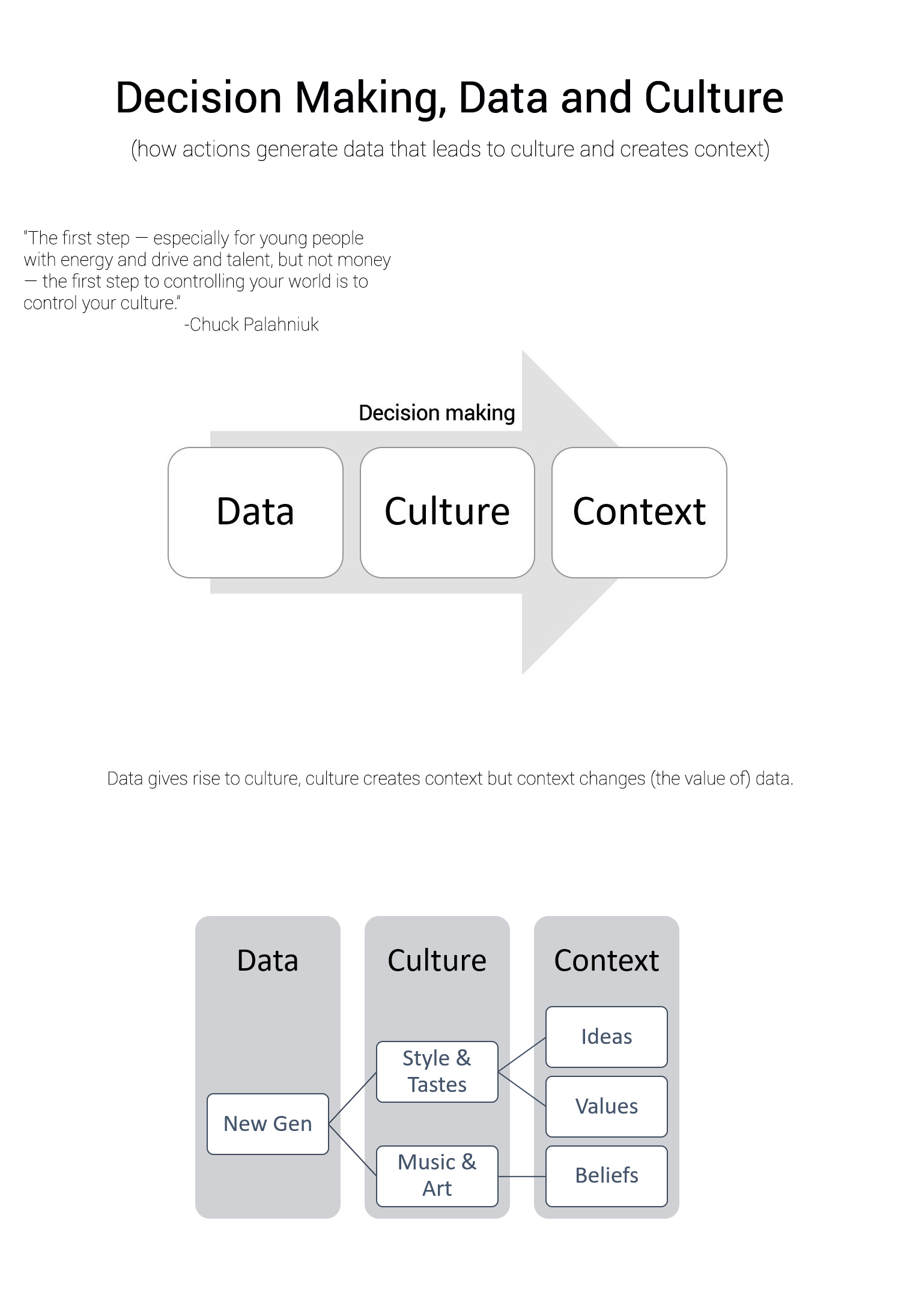 Because of that context is key to the decision-making process we apply.

Specifying the boundaries in which an interaction takes place can help you guide the behavior of others and receive the outcomes you seek.

back to top
Tagged under: Motivation pain willpower free will axons