Let’s start with something basic: “No, is the most dangerous word in the Dictionary.” If we accept, which we must, that words have meaning and that meaning arises out of the many interconnected, context-sensitive attributes that are ascribed to them, then we find ourselves in the world of semantic search where the meaning that we give to words has impact because it leads to actions.

The brain is no different to a search engine. Though infinitely more complex it nonetheless uses words to derive meaning about the world in order to better understand the reality it sees, predict the next moment and decide on its course of action.

When we pay attention to something like a conversation. we employ considerable mental resources to distill the meaning that lies in the words and behind them. This gives words the ability to hurt us. In a neuroscience experiment titled “Do Words Hurt?” researchers carried our fMRI analysis of the brain when exposed to negative words and found that discovered painful or negative words increase Implicit Processing (IMP) within the subgenual anterior cingulate cortex (sACC).

In other words anxiety levels increased and this negatively impacted on the brain’s ability to carry out basic tasks. Dr. Andrew Newberg, a neuroscientist at Thomas Jefferson University, and Mark Robert Waldman, a communications expert state, “a single word has the power to influence the expression of genes that regulate physical and emotional stress.”

That means that words, beyond their ability to confer data that creates a picture of the word inside our head, also convey emotion. What’s more they don’t just convey the emotion that arises out of the context of their meaning, they also convey the emotion that is associated with them as found in an EEG study carried out by the Institute for Psychology at the University of Göttingen.

This, in turn, means that words activate specific neurotransmitters in our brain and body that correlate to states of cognitive expectation or anticipation: fear, hope, excitement, love, adoration, social bonding and so on. These neurochemical states then lead us to take action.

This is why a speech such as that given by Queen Elizabeth I at Tilbury can turn the course of history. The clever employment of words led to a corresponding change of neurochemical state in those who heard them that led to coordinated, collective action that changed the outcome to something other than that suggested by the raw data of troop numbers and armaments alone.

All of this brings us to the subject of conversation. More than just a stream of words a conversation is, according to, the Interactive Brain Hypothesis, the sharing of information within specific format and intent. When that happens between two people, a dyad, it leads to neural activity, evoked by the brain that is unique to the context of the situation and the relationship between the two people (or parties) engaged in the conversation. Full engagement of each party within that dynamic mode of information exchange leads to what we understand to be paired communication. To better understand the emotional arousal activated by conversation, in the brain, check out this in-depth piece written by Nicklas Balboa and Richard D. Glaser, Ph.D. on Psychology Today. 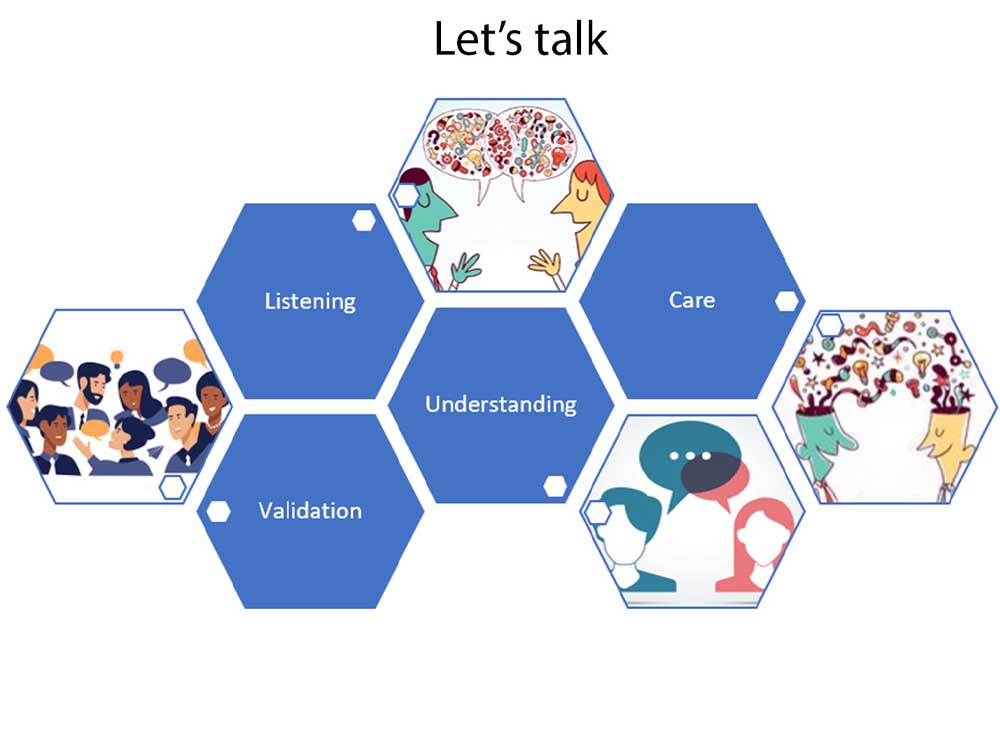 Conversation is made up of the specific components of Listening, Validation, Understanding and Care. Each of these is rife with personal and cultural constructs which then need to be extended in the interpersonal construct which represents the shared space of the conversation.

Simplify all this in the plainest English possible and you start off with the personal need to improve your condition which activates your motivation. This is then expressed through the higher level interaction of social interactivity which elicits cooperation, understanding, empathy and trust.

All of these represent distinct, complementary and overlapping neurochemical states that are accompanied by biochemical changes. Conversations, in short, can change our minds, rewire our brains, alter our perspective and redefine our perception of how we see the world and ourselves in it. Whether in-person or remote via our technology the effect is virtually the same. This has deep implications in marketing and branding as well as in our personal lives.

And it all begins with a simple “Let’s Talk.”