If you came to this article because of the contentious headline “Apologies” (as Spartacus would say). I brought you here by design and I will make it worth your while in my explanation. If you are a Flat Earth believer my apologies, if possible, are even more sincere. I understand you might be riled by the title but that is not my intention. I actually understand why you think the way you do and I hope that this article shows that.

Following the Netflix documentary “Behind the Curve” (trailer for this below):

Flat Earthers, of course, are making the news as a point of ridicule and a ‘lesson’ in flawed thinking. And Mark Sargent, in particular, is coming in for a lot of that ridicule, not least because of his agreement to be featured in the documentary and voice his views regarding the Flat Earth conspiracy theory. 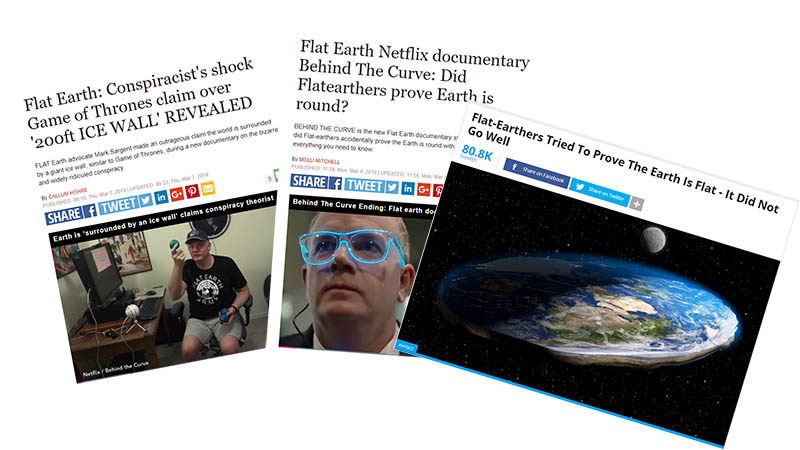 Neurobiology and evolution are forces that shape all of us regardless. Such is their ability to shape us that we even share the same emotions as our pets. So, when some of us believe something that the rest of us do not, and they persist in that belief despite provable evidence to the contrary, it is not a simple case of misguided belief that needs to “be set straight” or a case of cognitive slackness that requires some ‘tightening up’.

From a cognitive point of view Flat Earthers choose to believe in figurative Unicorns the same way Marco Polo chose to believe in actual ones. From the perspective of the observer who sees something and then goes on to make an inference based purely on his observations the cognitive mechanism they use is one that willfully ignores latent causes.

Yet, when wolves have the power to change the course of rivers ignoring the impact of “trophic cascade” and interconnectivity is the symptom of something much deeper and much more human than just the ability to ignore facts and latent causes.

Eratosthenes, chief librarian at the Library of Alexandria, in Egypt, proved the Earth is round more than two thousand years ago, using a stick, the sun, his knowledge of the distance between two cities and elementary high school math. He did so for the simple reason that he believed that knowledge about the world allowed us to make decisions and choices that gave us greater control.

At a time when it was culturally accepted that human destiny was decided by the gods. In an era when a cold or a natural disaster could kill you knowledge about the world was the only way humans could wrest control from the fate the gods had in store for them.

Interestingly (and revealingly, as it turns out) many Flat Earth blogs have the same argument as their dictum. 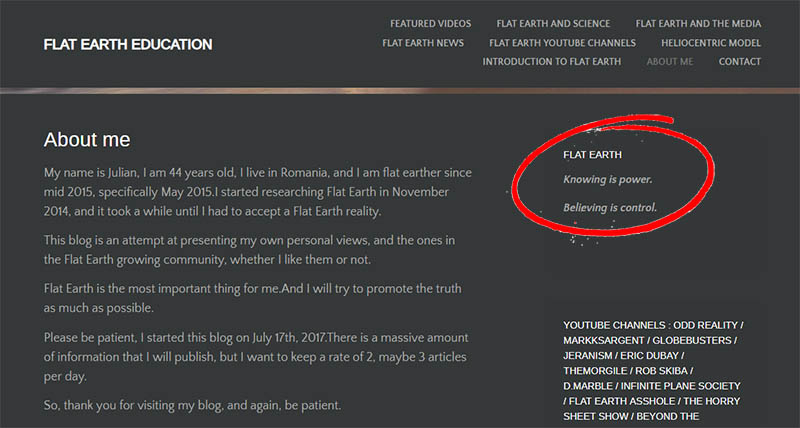 The New York Times magazine ran an article some years back that used psychology to explain, quite presciently as it turns out, the connection between belief in conspiracy theories and having a sense of control.

These motives are rooted in something older with a higher imperative that underlies identity curation: survival. The adaptive conspiracism hypothesis asserts that the tendency to believe in conspiracy theories, rather than being ‘wacky’ is actually the result of one of two:

competing evolutionary hypotheses: (a) conspiracy beliefs are a by-product of a suite of psychological mechanisms (e.g., pattern recognition, agency detection, threat management, alliance detection) that evolved for different reasons, or (b) conspiracy beliefs are part of an evolved psychological mechanism specifically aimed at detecting dangerous coalitions.

In other words, there is a cognitive mechanism inside our head that allows us to detect threats before they become life-threatening that, in this case, under specific conditions, goes a little haywire.

What those conditions are is suggested by another research paper (and in a moment of remarkable self-reflection, Mark Sargent himself in the opening minutes of the Netflix documentary) as:

the relationship between education level and belief in conspiracy theories, where lower levels of education have been found to be associated with higher conspiracy belief.

A relationship so strong, as a matter of fact, that when coupled with the cognitive bias called hypersensitive agency detection (HAD) – the tendency to attribute agency and intentionality where it does not exist or is unlikely to exist, it has been used to accurately predict the likelihood of a person believing in a conspiracy theory.

Tellingly, belief in one conspiracy theory is a gateway for belief in others even when the conspiracy theories themselves contradict each other. If at this point you feel like looking down on Flat Earthers, resist. Consider instead the struggle of a brain that has inadequate information about how the world works and is not trained to either assess what it hears and sees or get quality information, having to struggle with what its senses report and intuition infers, in order to make sense of it all.

What Is Going On?

Researchers point out that beliefs in conspiracy theories are based on four principals:

There is a direct implication here of a very short feedback loop between beliefs, actions and identity curation that must activate the brain's reward system and strengthen the motivation of a particular belief system and the actions associated with it. One downside of such beliefs is clearly evidenced in the recent measles outbreak in Italy and the subsequent rise of cases this century to a 20-year-high that is directly attributable to the spread of “Fake News” and the rise of populist governments with a stake in conspiracy theories and the undermining of traditional means of spreading information. 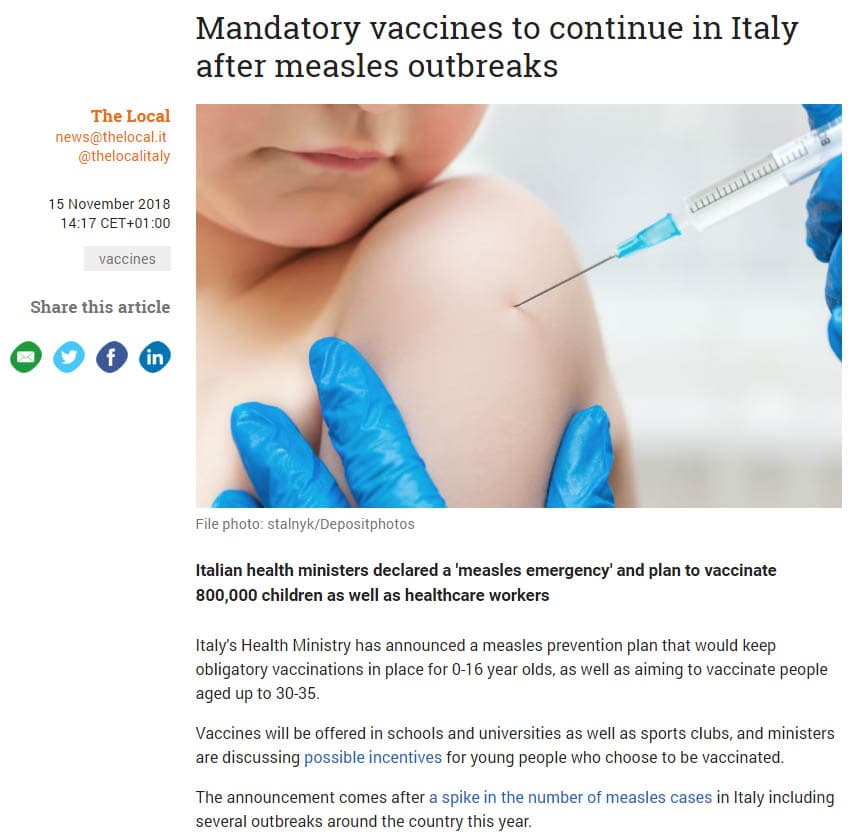 The first principal of belief in conspiracy theories tells us that even the most wacky of conspiracy theories will have an impact in real life because it is “rooted in the subjective reality of belief.” Interestingly this is the exact same principle used by brands to help them become memorable, recognizable and trusted.

Despite the issues that arise, there are also benefits that come out of all this, for example:

The second principal of conspiracy theories tells us that they occur throughout history and through many societies, a classic example of which is given to us by the witch hunts throughout Europe between 1300-1850 that took the lives of hundreds of thousands of individuals.

A recent economic paper that looks at the competing rivalry between the Catholic Church and the Protestant one, also beautifully illustrates the reason for those witch hunts through the third principal of belief in conspiracy theories:

Conspiracy theories—even blatantly irrational ones—are often supported by a range of elaborate arguments, suggesting that belief in conspiracy theories is based on analytic and deliberative (i.e., System 2) thinking processes.

Conspiracy theories are a social phenomenon in that they reflect the basic structure of intergroup conflict.

What Have We Learnt?

If you’re reading this and came here thinking this is going to be another piece where Flat Earthers are ridiculed, I am sorry. While, as a Chemical Engineer with an MSc in Quantum Effects in Laminar Flow Dynamics I do not support the Flat Earth theory, I understand the strong desire to believe and feel special by a group of people that have been consistently marginalized, ridiculed and diminished.

If you’re a Flat Earther and have stuck with all this so far, I am going to say that this is not a zero-sum game regardless of how you have been made to feel to date. Winning the argument on whether the Earth is round or flat (which really shouldn’t be an argument in the first instance) is not going to create a “lose” situation in the traditional sense. The drive for truth is universal and based upon the same tools we use to uncover knowledge: experience, experimentation and inference.

Alternative points of view are excellent in making us think about what we traditionally accept and I wonder if the energy and fervor spent on the Flat Earth theory might not be better used in other areas of our human activity where it can truly have positive social impact.

Finally, if you’re a marketer, (because I frequently correlate all this to practical marketing) consider that the cognitive mechanisms of subjective belief that we employ in the creation of brands can easily flip and feed the darker side of our belief system when we lack:

The survival mechanisms inside our head have been evolutionary developed to allow us to face fear, reduce uncertainty, detect threats earlier rather than later, and survive. The complexity of our world, its current level of uncertainty and the fear this generates, can make those wires cross. But in most cases, the greatest damage is done by our own tribalism and intransigence. Our own need to feel special (especially when we are made to feel we are not) and our own inability to embrace others at a fundamentally human level.